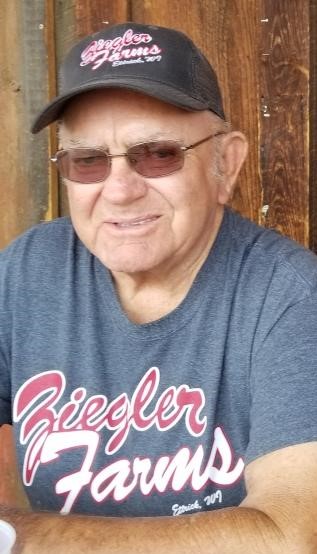 And on the 8th day, God looked down on His planned paradise and said, "I need a caretaker." So, God made a farmer.

Harold Edward Ziegler of Ettrick, WI passed away on Monday, June 29, 2020 at the age of 78. During a brief stay in the hospital, Harold died peacefully with his beloved partner Lois by his side.

Harold was born in Fox Coulee, Town of Trempealeau, on November 27, 1941 to Anton and Olive (Kube) Ziegler. Born into a farming family, Harold worked beginning at a young age on the farm in Fox Coulee and continued to do so until the late 60's when he purchased his own farm in the Town of Caledonia. In 1964 Harold married Marrilyn Richer and together they had 4 children. They later divorced.

Harold lived and breathed farming. There was no time for much else. His hobbies were fixing equipment and deciding what to plant. Though Harold never really "retired", eventually his son, Ken took over the farms; known to most as Ziegler Farms. Hardly a day went by where he didn't show up in the Gator to make sure all the guys were doing their job. When not out on the Gator, he'd watch out the window and could tell you every piece of equipment that left the shop and which direction they were headed. He loved the farm life.

As life slowed down for Harold, he also found a new appreciation for constant warm weather. Harold looked forward to heading south every winter to Arizona with his loving partner, Lois. For most of 7 years they traveled back and forth, driving from Ettrick to Apache Junction to soak up the sunshine during the cold Wisconsin winters. Together, Harold and Lois put on thousands of miles and made just as many memories. He was so in love.

Above all, Harold loved his family and friends, and considered many friends as family. He looked forward to visits with and always had a pot of coffee on when the neighbors stopped by.

The family will be having a private service. Family and friends are welcome to stop in at the shop on County Road D beginning at 1 p.m., on Saturday, July 4, 2020. In lieu of flowers memorials may be directed to the South Beaver Creek Church or Gale-Ettrick First Responders. Please leave a memory of Harold and sign his online guestbook at www.hofffuneral.com. Hoff Celebration of Life Center, Goodview, is assisting the family.