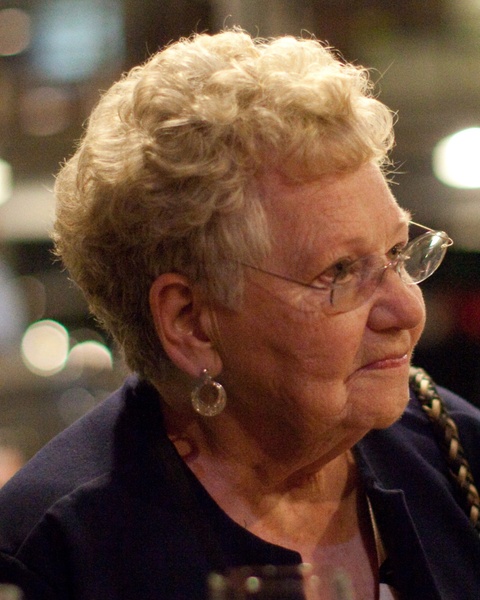 Gloria Darlo Schmidt, 91, of Eyota, died Tuesday, September 20, 2022, at Chosen Valley Care Center in Chatfield.  Gloria was born December 17, 1930, in Minot, North Dakota, the only child to Howard Beaton and Grace Mona Raymond.  Gloria was raised by her mother in the various places in the Pacific Northwest where her maternal grandfather and other extended family members lived.  She spent time with Aunts and Uncles and her grandfather as a small child and even lived with some Nuns for a few months.  Her mother married Harold McWhirter, a Sargent in the U.S. Army in the late 1930’s and Gloria moved wherever the Army sent her stepfather.  That included locations in Alabama, Florida, and Seattle, Washington.  After the start of WW II she was sent to live with relatives in Minnesota.

Gloria married Richard (Dick) W. Schmidt in Eyota, Minnesota in June, 1945.  She and Dick farmed with Dick’s parents on their farm 2 miles east of Eyota off highway 14.  They raised Hereford cattle and created a successful feedlot operation.  They were very active with their children in the local 4-H Clubs, and the state Cattleman’s Association.  Following Dick’s death in 1980 Gloria remained on the farm with her youngest son Rick who continued to farm and raise cattle for several years.  She was also remained very active in the Minnesota Cattlewomen working with young people.  When Rick stopped farming she rented the land until she sold it in 2002.  After Dick’s death Gloria worked as a phlebotomist at St Mary’s Hospital for 22 years.

Gloria built a house in Eyota in 2002 and lived there until her health forced her to move to Chosen Valley Care Center in 2021.  While in her home in Eyota she remained an active member of St. Paul’s UCC and the local community.  She pampered her dogs and enjoyed the company of her friends and neighbors and she always had great friends.  She loved playing cards, quilting, baking cookies, babies, and the young children in her neighborhood.

Gloria is survived by her five children, Diane Schmidt of Eyota; William Schmidt (Mary) of Fairfax, VA; Linda (Schmidt) Grabau of Appleton, MN; Peter Schmidt (Jan) of Dover, MN, and Rick Schmidt (Peggy) of Eyota.  She has eleven surviving grandchildren and 12 great-grandchildren. She was predeceased by her husband Dick Schmidt, one granddaughter, Samantha (Whitcomb) Kobriger of Eyota, and one great-grandson, Oliver Schmidt of Chatfield, MN.

Funeral Services will be 11 a.m., Wednesday, September 28, 2022, at St. Paul’s United Church of Christ north of Eyota with the Reverend Jean Boese officiating.   Pall bearers will be Gloria’s grandsons: William R. Schmidt II, Chad Grabau, Brett Grabau, Nate Nesler, Scott Schmidt, and Evan Schmidt.  Honorary pallbearers will be great grandson Cooper Schmidt.  Burial will be in Oak Grove Cemetery, Eyota. A visitation will be from 9 a.m. until time of services at the church on Wednesday.  Hoff Funeral Service of St. Charles is assisting the family with arrangements. www.hofffuneral.com.

The family requests donations to the American Heart Association, the American Cancer Society, the Eyota Volunteer Ambulance Service, or your favorite charity in lieu of flowers.