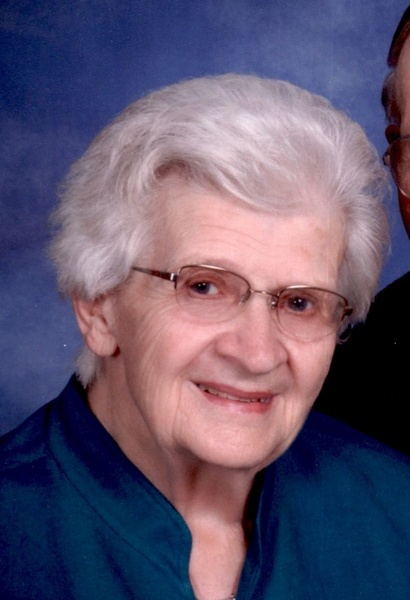 Gladys was born June 21, 1929, in Hillsdale Township, Winona County to Adolph and Frieda (Jacobs) Prigge. She and Marvin Ellinghuysen were married on June 4, 1950, at Immanuel Lutheran Church at Silo in rural Lewiston. Gladys attended Hillsdale Country School. After completing 8th grade, she stayed home to help on the family farm. Following their marriage, Gladys and Marvin farmed near Plainview. In 1963 they moved to their present farm near Lewiston. She farmed with Marvin and raised their 2 children. She also raised chickens and sold many eggs to her very loyal customers in the surrounding area. After her children were grown, she worked at the Lewiston Villa Nursing Home as a dietary aide. Gladys loved this job and gained many friends. She retired at the age of 70. She lived in her home until 2 months ago and enjoyed making meals. Gladys always made sure any visitors were welcomed with a cup of coffee and a snack.
Gladys is survived by her daughter Mary Feller of Watertown SD, a son Allyn Ellinghuysen of Winona, eight grandchildren; Martha & Jeremy Feller of North Carolina, Laura Feller & Annie (Rob) Konold of Watertown, SD, Wendy (Johannes) Badenhorst of Lanesboro, Emily (Pete) McIntire of St. Charles, Jesse (Amy Doughty of EauClaire, WI and Lisa (Brandon) Rakstad of rural Winona, great-grandchildren; Christine, Madalyn, Lilly, Paisley, Daniel, Kathryn, and Sawyer. She loved her grandchildren and great-grandbabies. Gladys is also survived by her brother Willard (JoAnne) Prigge, brothers-in-law; David Timm, and Franklin (Bernadine) Ellinghuysen, sisters-in-law: Leona Klassen and Barb Prigge. She was preceded in death by her husband Marvin, her parents, sister Margaret Timm, brother John Prigge, sisters-in-law, Arlene Pitman and Marion (Melvin )Dickerson, brothers-in-law, Harold and Clarence Ellinghuysen, and a daughter in law Kathryn Ellinghuysen.
Funeral services will be held at 11 a.m., Saturday, March 20th at Immanuel Lutheran Church Silo in rural Lewiston with the Rev. Ron Prigge officiating. Visitation will be at the church on Friday, March 19th from 4-8 pm and one hour before the service. Burial will follow in the Church Cemetery. Pallbearers will be Jeremy Feller, Jesse Ellinghuysen, Johannes Badenhorst, Pete McIntire, Brandon Rakstad, Rob Konold. Honorary Pallbearers will be her grandchildren, great-grandchildren, and nieces and nephews.
Hoff Funeral Service of Lewiston is assisting the family with arrangements. Please share a memory of Gladys and view her video tribute when it becomes available at www.hofffuneral.com.