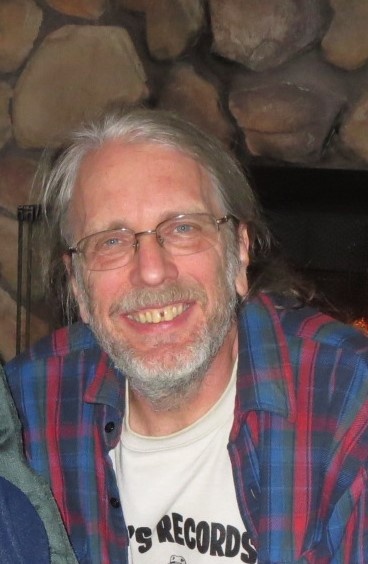 Gerald (Jerry) Alan Modjeski, of La Crosse, Wisconsin, formerly of Winona, Minnesota, passed away unexpectedly on May 3rd, 2021. Jerry was 60. Jerry is preceded in death by his parents, Gerald and Barbara Modjeski, and brother Jim Smith. He is survived by brother David (Leigh) Smith, sister Mary (John) Merchlewitz, brother Wayne Modjeski and many nieces and nephews.
Jerry's ears were open from early years to an array of sounds echoing up and down the Mississippi: from the family's radio on at all hours of the day, television and classic movies, to records played on the family phonograph, to lyrics he learned through his mother Barbara's sonographic memory. This early sonic training, ranging from Spike Jones, Stan Freberg, Bob & Ray to classic country to radio theatre, late-night radio wanderings, and comics, joined with Jerry's later audio explorations. These early influences led to Jerry having a passion for creative radio. A trained broadcaster in commercial radio, Jerry found his true home at Twin Cities community radio station KFAI. From the early 1980s through 2006, Jerry created and co-produced six programs. These programs reflected Jerry's interests and passions, segueing from hilarious spoof ads to always-interesting music, all with precision editing and a mind to the listener experience. Jerry's technical precision and creative mind were critical elements in bringing the program Little City in Space to national syndication. In the radio theatre community, Jerry's skills in writing, sound effects, and lightning-quick editing are legendary. Most recently, Jerry's interview with early electronic composer Bebe Barron, was included in the documentary "Sisters with Transistors," about female pioneers in electronic music. Jerry was overjoyed to have seen the documentary, and to know that his work mattered to a larger creative community.
While presenting to some as shy, in his creative life, Jerry was a master at convening communities, cultivating friendships, and consolidating ideas. With his open ears, Jerry listened to all, creating radio and live events reflecting the thoughts and works of his friends. His ability to listen deeply and welcome friends created lifelong bonds and trust. A list of friends could stretch for days; among those lifelong friends are Mark Masyga, Chuck Isle, Peter Stenshoel, Stuart and Damon Mathews, Marc Myers, Chris Waterbury and Barbara Sibley. Jerry's vast creative communities across the country, airwaves, and those who explore the unknown join the family in shared grief at his passing. Jerry was committed to being a true and loyal friend to his feline friends. Among those whose paws made an impression on Jerry's big heart were Boots, Dagmar, Kitty 1, and Kitty 2. Jerry and his zest for life will be missed by those of us who remain.
A celebration of Jerry's life will be held at 11 a.m., Saturday, July 3rd, at Hoff Funeral Celebration of Life Center, 3480 Service Drive, Winona, MN 55987. Visitation will be 10 a.m., until the time of the service. Cards may be mailed to: Hoff Celebration of Life Center, c/o Jerry Modjeski Family, 3480 Service Drive, Goodview, MN 55987.
Please share a memory of Jerry and sign his online guestbook at www.hofffuneral.com.