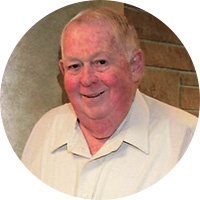 George P. Robinson Jr., age 80 of Winona, passed away on Monday, December 6, at the Mayo Clinic Health System - Franciscan Healthcare in La Crosse, WI. George was born on March 1, 1941 in Freeport, IL, the son of George Sr. and Iva (Mead) Robinson. He attended school in Lena, IL, and met the love of his life, Marlene, when they met as teenagers in the Freeport/Lena area; the two were united in marriage on October 3, 1959, and together they shared over 60 years of dedication to each other.
George began his working life at an early age when he discovered his talent for being a handyman and jack of all trades. He started work in Illinois before relocating with Marlene to New Hampton, IA, where he was a butcher for the local IGA grocer; from there, he took a job as a butcher for Red Owl grocers and eventually followed the company to Winona before taking a position for Winona County as a maintenance worker.
George and Marlene shared a lifetime of adventures; they traveled all over on their Honda Goldwing motorcycle and always enjoyed where the road took them. Marlene often accompanied George on work-related travel as well as the many spontaneous, fantastic trips that arose unexpectedly. He was at peace and relaxed in nature, and thoroughly enjoyed many camping trips with his family.
George will always be remembered by his wife of 62 years, Marlene; daughter, Jodi Robinson; grandchildren, Logan and Ethan Finne; as well as many nieces, nephews, other extended family, friends, and his Little Brother, Richard (Bonnie) Hart.
He was preceded in death by his parents, George Sr. and Iva; and brother, William (Phyllis) Robinson.
A Celebration of George's Life will be held at 11:00AM on Saturday, December 18 at the Hoff Celebration of Life Center in Goodview. Visitation will be held for one hour prior to the Celebration from 10-11 AM. The Hoff Celebration of Life Center is assisting George's Family with arrangements.