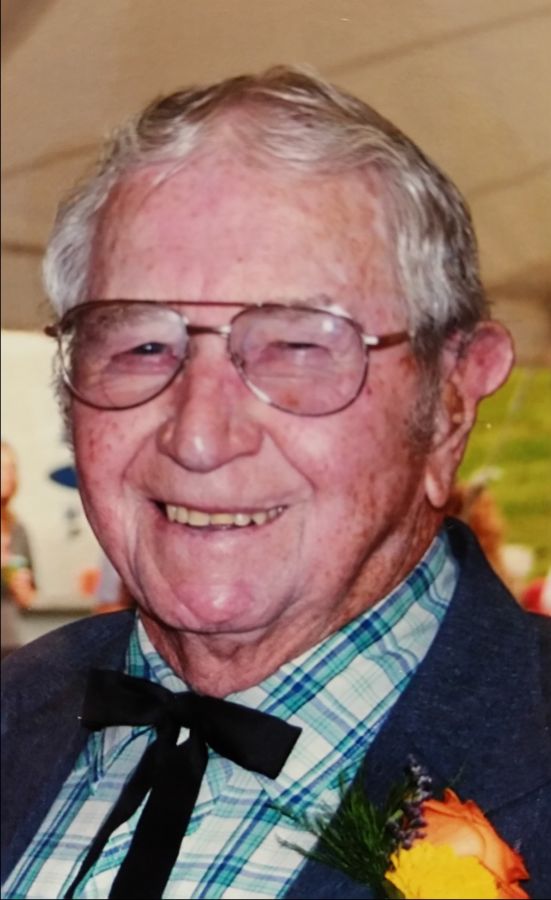 Freddie Melvin Arnold, 94, passed away Saturday, February 16, 2019, at Good Shepherd Lutheran Home, Rushford, MN. He was born on Tuesday, April 1, 1924, the seventh of eleven children to Inez Marian Veir Johns Arnold and Harry Murry Arnold in Rushford, MN. Freddie was baptized at Emmanuel Episcopal Church, and raised on the corner of Winona & Maple Streets along the Rush Creek until the death of his mother in 1935. He became a foster child in the Hart, MN farm home of extended family members, Vergilia and Herbert Haack. He attended school in Rushford and Rush Creek and worked as a farm laborer and did trucking in the area. He frequented the Corner Café and there met a cute, petite waitress, Virginia Mae Dent Mann, they were married on August 16, 1947 in Rushford. He suddenly became a father to three young boys, Stanley, Kenneth and John and within a year they had a daughter, Gail Andra, and another daughter, Mary Inez, ten years later.

In 1948, he began working for Tri County Electric Cooperative (now MiEnergy) as a laborer/trucker and retired as Assistant Operations Manager in 1986.

Freddie always had a fondness for horses and Black Angus cattle and was a member of the Root River Saddle Club. Always active outdoors, he had a great appreciation of nature and the local hills and streams, whether it be hiking, trail riding on horseback or by jeep, hunting or fishing, and he shared that with his children, grandchildren, the neighbor kids, and many others.

After retirement, he drove school bus for Rushford-Peterson Schools. He also enjoyed restoring old tractors (his favorite being John Deere) and wood working in his new garage. He made many cradles, quilt racks, shelves, kiddie cars and rocking horses. He could repair most anything and figure out how to do most everything!

Grandchildren and then great grandchildren were his pride and joy. He so enjoyed any and all immediate and extended family gatherings. He also was willing to help out anyone in need and shared his love of his community by being a member of the Presbyterian Church, Rushford Historical Society, and the Sportsmen Club.

A memorial service will be held at 11:00 am on Friday, February 22, 2019, at Hoff Funeral Home in Rushford, with Rev. James Scaife officiating. Visitation will be from 4:00 to 7:00 pm Thursday, February 21, and one hour prior to the service Friday at Hoff Funeral and Cremation Service, Rushford, MN. In lieu of flowers, the family prefers memorials directed to Rushford Ambulance Service, Rushford Historical Society or Bremmer Suites. Burial of his ashes will be held in the spring at Oak Grove Cemetery in Rushford. Please leave a memory of Freddie and sign his guestbook at www.hoffuneral.com