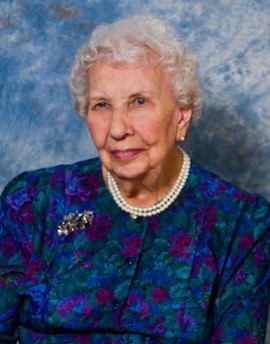 Esther Margaret Berndt, 99, of Winona, died Saturday, May 30, 2020, surrounded by her family at the home of her daughter in Bluff Siding, WI, from injuries sustained from a fall.
She was born to Edward and Cora (Stillman) Senske on the family farm in rural Augusta, Wisconsin, the youngest of 12 children. All her life she was interested in learning. She began her education at Otter Creek Center School, a one-room country school. She was an exemplary student, often helping the teacher with younger students. Esther graduated from 8th grade with high marks in 1933. She went on to further her education and graduated with honors from Augusta High School in 1937 and Winona Business College in 1938.
She married Edwin Berndt on September 1, 1938, at St. Martin's Lutheran Church in Winona. From this union 7 children were born. Two sons died in infancy.
Esther was a hard worker with great attention to detail. She was Office Manager for her husband's business, E.F. Berndt Building Maintenance. Following the unexpected death of Edwin in 1965, she focused on raising her three youngest children. Esther returned to school at Winona Technical School, graduating in 1966. After graduation she then held positions at Winona Technical College, Minnesota OSHA and Apollo Books. After retiring, Esther spent time volunteering at the United Way and assisting the Polish Museum with typesetting their Anniversary Celebration Book.
Esther embraced technology and was an active computer user. For her 95th birthday her request for a gift was a new laptop computer, which she used daily up until recently. Constantly challenging herself with countless crossword puzzles and maintaining a proficiency in short-hand, she also served as the family's resident grammar expert and was continually sought after for her knowledge of family history.
Esther greatly enjoyed travel. A special fondness for the flowers and the climate of Hawaii led her there 21 times. Excursions to Aruba, Alaska, the Caribbean via cruise, Niagara Falls, the five Maritime Canadian Islands and Mexico were among her destinations along with numerous other trips to the lower 48 states and local sites.
Esther loved to crochet. Often taking her current project along on trips, she crocheted countless afghans for both infants and adults. She took pleasure in gifting her granddaughters and great-granddaughters dresses and Barbie doll dresses. Potholders, chair back sets, rugs and gloves were also often seen projects. Colorful, artistically done doilies were a special talent and a much sought after gift. She was an accomplished seamstress, having sewn for her family since early in her marriage.
Esther greatly valued her friendships. She participated for many years in monthly luncheons and coffees put on by neighborhood friends. In later years she enjoyed the activities and friendships she had as an active member of two Red Hat groups.
Esther was a woman of faith, active in her churches, initially Lakeside Evangelical Free Church (now Pleasant Valley Church), and then Cornerstone Community Church. She shunned the "limelight" but often helped behind the scenes in many ways as well as faithfully preparing the Sunday morning bulletins for many years.
She is survived by daughter, Darlene Berndt Ellingson of Bluff Siding, WI, sons Robert (Margelyn) of LaCrosse, WI, Terry (Peggy) of Savage, MN, daughter Wendy Berndt Feeley of Eagan, MN, 8 Grandchildren, 14 Great Grandchildren, 4 Great-great Grandchildren, many nieces and nephews. Preceded in death by her husband, Edwin, infant sons Daryl and Jason, daughter Audrey, sons-in-law Neil Ellingson and Stephen Feeley, grandson Steven Ellingson.
Family and friends are invited to celebrate Esther's life at 1 p.m., Saturday, June 6, 2020 at Cornerstone Community Church (Hwy 61 & 44th Ave) in Goodview, MN. She will be laid to rest at Woodlawn Cemetery. Visitation will be 12:30 p.m., until the time of the service; please follow social distancing guidelines. Hoff Celebration of Life Center - Goodview is assisting the family with arrangements.
She was loved immensely and will be greatly missed!
Please share a memory of Esther and sign her online guestbook at www.hofffuneral.com.