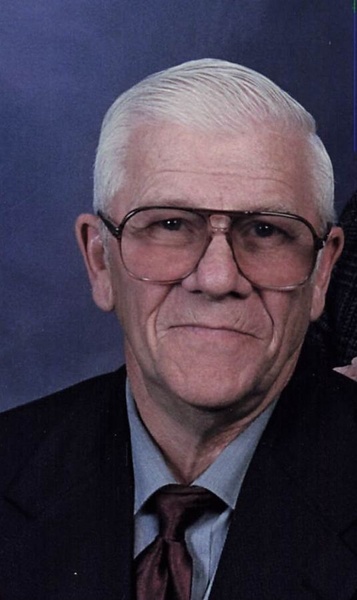 The Funeral Services in remembrance of Edwin John Rehbein, age 90, will be held on Friday, June 25 at St. Matthew's Lutheran Church in St. Charles. There will be a visitation for family and friends held from 4-7 PM on Thursday, June 24 at church, as well as one hour prior to the funeral on Friday. Edwin passed away peacefully on Monday, June 21 at Whitewater Health Services in St. Charles. The Hoff Funeral Home of St. Charles is assisting Edwin's family in arrangements.
Edwin was born on June 16, 1931, to Leonard and Rose (DeVriese) Rehbein on a farm in Rockdell and later moved to a farm just north of Chatfield. He attended country day school for seven years and began working for his father as well as several local farms. On March 5, 1952, he was united in marriage to Delores Wehrs at Trinity Lutheran Church in Elgin. He was drafted into the United States Army in May of 1952 and served in both France and Germany for 2 years. Upon his honorable discharge, Edwin worked for the Elgin Creamery until 1962, when he and Delores relocated to St. Charles; he worked at the St. Charles Creamery until its closing and also helped Delores as the owners of the Traveler's Eat Shop. He went on to work for Home Produce as well as Hubbard Foods in Altura. In 1998, Edwin retired and began cutting grass for schools.
When he wasn't hard at work, Edwin enjoyed camping and fishing, especially in Alexandria, as well as meticulously mowing lawns.
Edwin will always be remembered by his wife of nearly 70 years, Delores Rehbein; daughters, Debra (David) Larson, Wanda (Pat) Beyers, Susan (Mark) Robb; grandchildren, Travis Stearns, Shaun (Jamie) Stearns, Casey (Erin) Stearns, Nicole Goodrich, Michael (Sarah) Goodrich, Leann (Scott) Thisius, Daniel (April) Robb, and Michael Robb; great-grandchildren, Caitlyn, James, Ethan, Kadynn, Adeline and Chase Stearns, as well as Christopher, Allie, Lucas Thisius and Elijah Robb; step-grandson, Michael Larson; sister, Mary Ann Boelman; as well as nieces, nephews, other extended family, and close friends.
He was preceded in death by his parents, Leonard and Rose; brothers, Donald (Darlene) Rehbein, Rodney Rehbein; sisters, Agnes (Clifford) Neimeyer, Betty Urban and Esther Mae (Wallace) Nickelson.
In lieu of flowers, memorials are preferred to St. Matthew's Lutheran Church.