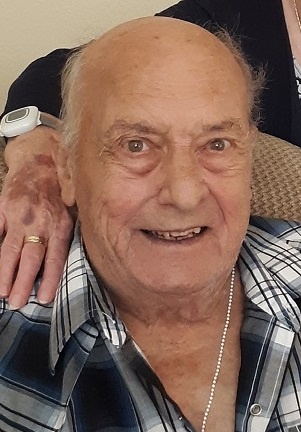 Earl Ethan Bockenhauer, 86, passed away April 21st at Sugar Loaf Senior Living under Hospice care with his loving wife at his side.

He was born on the Bockenhauer Family Farm near Centerville, WI, on December 28, 1934, to Earl Stanley and Viola (Storm) Bockenhauer. He attended the White School through eighth grade, Galesville High School as a freshman, and then with redistricting, he went to Trempealeau Healy Memorial High School, graduating in 1952. He farmed with his Dad and also worked as a welder at Warner and Swasey in Winona.

On September 21, 1957 he married Frances Lee of West Salem, WI. Daughter Linda was born while they lived on the Wisconsin Bockenhauer Family Farm where he farmed with his father. They purchased a farm in the Utica/Lewiston area and the family of three moved to Minnesota on April 15, 1961. Their two sons, Dean and Carl, were born in the next three years. Earl and his family ran a dairy farm until 1986 when the herd of cows was sold. He got into the trucking business and had as many as six hired drivers on the road.

Along with farming Earl sold Vermeer Balers for several years, inventing an addition to the round balers that reduced friction and increased efficiency. This invention brought the company owners to the farm to check it out. He also applied for a patent, but his request was denied. Earl sold oil for the Archer Oil Company and served as a county manager. He was a member of the Lewiston Area Jaycees and Winona County NFO.

Funeral Service will be 10:30 a.m., Tuesday, April 27, 2021 at Cornerstone Community Church (1001 44th Avenue, Goodview, MN). Visitation will be 4-7 p.m., Monday and one hour prior to the service, all at the church. He will be laid to rest at Lewiston Church of the Brethren Cemetery. Memorial gifts will be given to Winona Area Hospice, Sugar Loaf Senior Living, and Heifer International. Hoff Celebration of Life Center is assisting the family with arrangements.
Please sign his online guestbook and view his video tribute when it becomes available at www.hofffuneral.com.