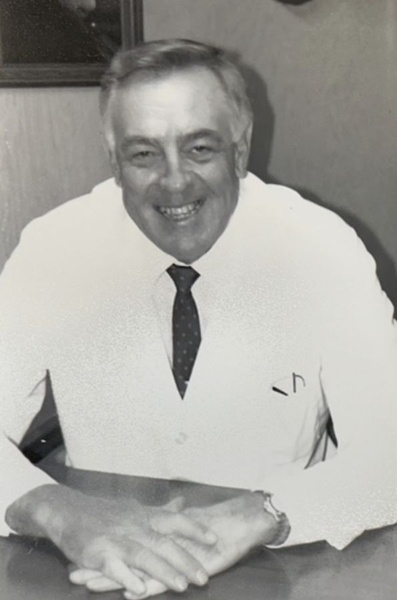 Please click the link to the YouTube channel included here to view Dr. Peterson's service virtually at 1:30 on Sunday, March 20:

ANNOUNCEMENT: THERE WILL BE A CELEBRATION OF DOC'S LIFE AT 1:30 P.M. ON SUNDAY, MARCH 20 AT THE RUSHFORD - PETERSON HIGH SCHOOL THEATER.
FOR THE SAFETY OF ALL, THE FAMILY REQUESTS THAT ALL IN ATTENDENCE WEAR A MASK.

Dr. John R. Peterson, "Doc Pete," 90, of Rushford, MN made his final rounds on Monday, January 17, 2022, at the Good Shepherd Lutheran Home in Rushford, five years after suffering a debilitating stroke. Doc touched the lives of many during his 62 years in Rushford as a physician, farmer, sports enthusiast, school board member, golf partner, and supporter of the community he loved.

John Robert Peterson was born in the depths of the Great Depression on June 28, 1931, in Butte, MT to Alfred and Emma (Hedstrom) Peterson. He was raised on a cattle ranch in the Big Hole Valley near Jackson, Montana. He attended a one-room school house where he and his brother, Darwin, were infamous for placing a dead skunk in the stove vent to reap a few days off. Doc graduated from Dillon High School in 1949 and went on to the University of Montana where he completed in three years the courses required for admission to the University of Oregon Medical School. He was one of two students from Montana accepted to the medical school that year where he received his Bachelor of Science degree and then his M.D. in 1956.

Doc married his high school sweetheart, Elaine Andersen, during his summer break in 1954. Knowing little of Minnesota winters, Doc, Elaine and son, Greg, moved to St. Paul after medical school where Doc completed an internship at Ancker Hospital (now Regions). Daughter Cindy was born there on January 30, 1957, which Doc always claimed was the coldest day ever.

He then served in the U.S. Air Force in Texas as a flight surgeon for two years. Here, he met several pilots who flew U-2 spy planes and experienced, firsthand, the thrill of ejecting from a fighter jet that lost its canopy at 20,000 feet.

Having been persuaded by its city leaders to practice medicine in Rushford, Doc Pete started in at the Rushford Community Clinic on July 2, 1959. He later obtained his board certification in Family Practice and served the community of Rushford as a physician until 2011. Doc was committed to the excellent care of his patients and was available to them, day or night, for decades.

Doc Pete was preceded in death by Elaine, his parents, brothers Darwin, Harold and Dick, and grandson-in-law, Vince Glasgow.

Doc Pete lived a rich and adventure-filled life. He loved to hit the slopes with his kids and watched Mike grow to become an expert skier. He returned often with his family to the mountains of Montana to visit the ranch his brother Harold ran and to fish the crystal clear waters of the alpine lakes he discovered as a young boy. When his brother, Darwin, moved his family to Alaska, Doc visited frequently to fish the glacier-fed Kenai River for trophy rainbow trout and salmon with his brothers and cousin, Russell Peterson. He traveled several times to Brazil with nephew, Pete, where he fished for peacock bass on the Amazon and parasailed off a mountain in Rio de Janeiro. At home, Doc treasured the times his kids and grandkids came to visit him at "the Big Green House."

Doc's heart never left Rushford, though, where he cherished the time spent at Ferndale golfing with his many friends and at "The Farm" tending to his prized black angus cattle. Above all, he remained forever grateful that the good people of the Rushford area afforded him the opportunity to fulfill his calling as a healer, a servant, and a friend.

The family extends a special thank you to the staff of Good Shepherd and to Judi for the tender loving care they delivered to Doc. The family also is very grateful for the many friends who visited and supported Doc these past five years and who assisted him with transportation. Given that Doc would not have wanted to be responsible for spreading COVID at a funeral service, his family has decided to delay a celebration of his life until May. Details will follow.

Please leave a memory of Doc Pete and sign his online guestbook at www.hofffuneral.com.