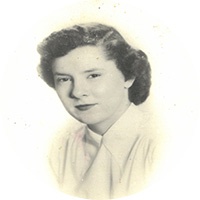 Dorismae Dorothy Wikre, 88 of rural Lanesboro, died Monday, December 13, 2021 at her home surrounded by her children. Dorismae was born on September 8, 1933, in St. Paul to Arthur and Josephine (Burnett) Strandberg. On January 2, 1954, she was united in marriage to Melvin Wikre. In 1986, Melvin and Dorismae moved from St. Paul to their farm in rural Lanesboro. There she loved bird watching, especially hummingbirds. Dorismae also enjoyed sewing, knitting, and crafting. They enjoyed family camping trips to Canada and South Dakota.

She was preceded in death by her husband, Melvin; her parents; and brother, Ernest Strandberg.

A private family service for Dorismae will be held. She will be laid to rest in Arendahl Lutheran Cemetery in Peterson, MN. Hoff Funeral and Cremation Service, Rushford, is assisting the family.