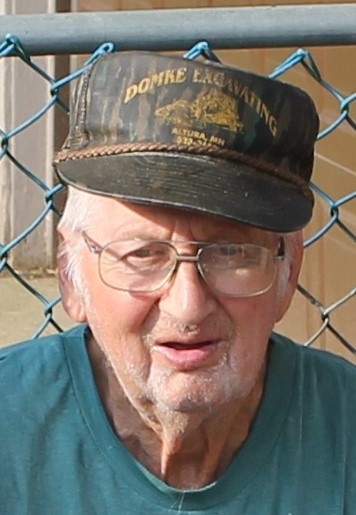 Don Prebe, 84, of Elba died peacefully, Sunday, May 10, 2020 at Greenwood Prairie Rehabilitation Center in Plainview. He had been a resident there since December 2019, suffering from Parkinson's Disease. Don was born May 24, 1935 in Lake City, Mn. to Francis and Amelia (Stephans) Priebe. He attended school in Lake City prior to enlisting in the United States Army, where he was stationed in Germany. After his discharge Don met Becky Haack. They were married in August of 1964 and made their home in Elba. Don worked for Chuck Schell, Elba Creamery and Walch Farm Service before working as an over the road truck driver.
Survivors include his wife Becky, three children, Troy (Kristin) of Goldsboro, N.C.; Trudy (Tom) Lafky of St. Charles and Tracy (Christy) of Seven Springs, N.C., eight grandchildren; Matthew Prebe (Liz) of St. Charles and Ashley Prebe, Daniel Prebe and Jakob Prebe of Goldsboro NC, Erin Lafky (Cody) of Potsdam and Erica Lafky of St. Charles, Jackson and Jaedyn Prebe of Seven Springs, NC, four great-grandchildren,: Payton, Aubree, Sophia and Mia. He is further survived by six sisters and one brother; Vivian Morehouse, Cecilia (Jack) Kautz, Mary Glander, Marlene Schuchard and Joyce Sholer of Lake City, Darlene Domke of Altura and Bob (JoAnn) of Helena MT, a sister-in-law Bonnie Ward and a brother-in-law Terry (Pat) Haack. He is also survived by many nieces and nephews. He was preceded in death by his parents, three sisters, one brother and ten brothers-in-law.
Don's family would like to thank nephew Tom Haglund for all the trips to the VA.
In accordance with current restrictions, a private family service will be, led by funeral celebrant Jodi Heim. Burial will follow at St. Aloysius Cemetery in Elba. Memorials for Don's family may be mailed to Hoff Funeral Service, P.O. Box 576. St. Charles, MN 55972. Please share an online memory of Don and view his video tribute, when it becomes available at www.hofffuneral.com.