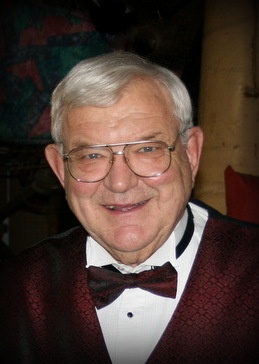 Earth lost, and heaven gained, a wonderful husband, father, and grandfather when Donald Leonard Fick passed away peacefully January 29, 2021 at Benedictine - St. Anne in Winona, MN. Don was born May 26, 1933, the second of seven children, of Leonard and Aila (Radke) Fick in Wilton, WI. After graduating from Wilton High School, Don went to the University of Wisconsin-River Falls where he was a member of the men's basketball team and earned a Bachelor of Science Degree. He then taught for five years in Wisconsin before going to the University of North Dakota where he earned his master's degree. He moved his young family to Winona in 1960 when he began working at Winona State University. In 1968 he went to Oregon State University in Corvallis, OR where he earned his PhD in Science Education. Don then continued to teach at Winona State University until 1992 at which time he retired from the Chemistry Department. While attending UW-River Falls, Don met the love of his life Phyllis Adelyne Pabst. They eloped and wed on November 7, 1954 at the "Little Brown Church" in Nashua, Iowa. Together Don and Phyllis raised five children: Richard (Bobbi) Fick of Turtle Lake, WI, Robert (Catherine) Fick of Portage, WI, Barbara Fick (Chad Finn) of Corvallis, OR, Becky (Tom) Navarre of Altoona, WI, and Mary Kae (Carl) Walters of Eau Claire, WI.
Don will be remembered for his passion of teaching both in, and out, of the classroom. He was the type of teacher who would help all students, whether on his roster or not, until they learned a concept well. He loved to talk and visit with others and had a knack for making everyone feel welcome at social gatherings. Playing a good card game of 500 or dominoes was a favorite pastime. Don loved to spend hours on the tractor working in the fields of his son Richard's farm. Children of all ages were drawn to his "gentle giant" spirit as he would smile and wink to make them laugh. Many grandchildren and children of friends rode on Don's knees for a "jiggety, jig, jig ride up to the sky". Don was a longtime member of Central Lutheran Church where he served on numerous boards and committees over the years. He was also a member of the Winona Area Barbershop Chorus and participated in their annual shows for many years. He was a member of the Southern Honkers Camping Club. He and Phyllis enjoyed spending hours around the campfires with friends made through this group. Don and Phyllis spent many winters in Coolidge, Arizona where they made wonderful lifetime friends exploring the desert, small towns, and historical sites. He will be dearly missed by his family and friends for his quick wit, loving kindness, and generous heart.
Don is survived by his loving and devoted wife of 66 years, four children, eleven grandchildren, Jesse (Tara) and Janel Fick, Grant, Spencer, and Elizabeth Fick, Elliott (Clara Thomann) and Ian Finn, Victoria and Trenton Navarre, and Mikaela and Garrett Walters; two great grandsons, Carson and Nolan Fick; sisters, Elaine Hardin and Ruth Ann Berger; brothers, Edward (Karen) Fick and Charles Fick; brother-in-law, Tom Obenberger, and many nieces and nephews. He is preceded in death by his parents, son Richard Fick and son-in-law Chad Finn; sister, Joanne Obenberger; sister and brother-in-law Joyce and Bruce Harrison, and brothers-in-law Gene Hardin and Bernard Berger. A small private family service will be held with a larger gathering being postponed until a later date. In lieu of flowers, the family is asking for memorials for the Donald & Phyllis Fick Scholarship Fund at Winona State University or for Central Lutheran Church. Cards may be mailed to Hoff Celebration of Life Center, c/o Don Fick Family, 3480 Service Drive, Goodview, MN 55987. Hoff Celebration of Life Center is assisting the family with arrangements. www.hofffuneral.com.