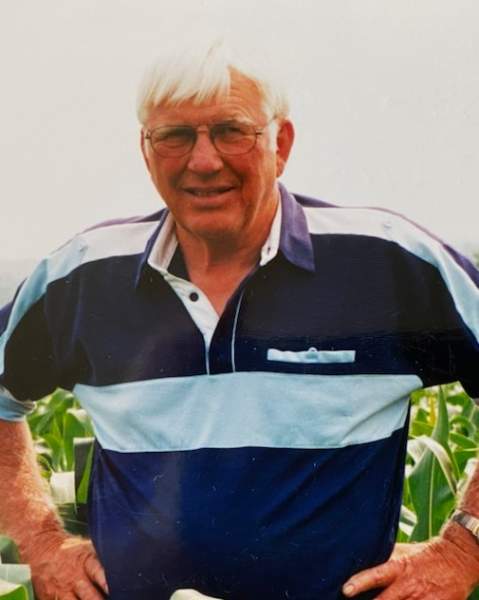 On Friday, August 26, 2022, Donald John Boyum made his journey home to heaven.  He passed peacefully from this world and walked joyfully into the loving arms of his Lord and Savior Jesus Christ.

Donald (Don) was born in Rushford, Minnesota on August 10, 1933 to John and Gertrude (Boyum) Boyum.  He grew up, along with five siblings, on the family farm 3 miles north of Peterson, MN.

In his youth, Don helped with farm chores and enthusiastically participated in 4-H and showing cattle at the Fillmore County Fair.  (He became a life-long promoter of 4-H in Fillmore County and was honored for his supportive efforts.) He also enjoyed playing basketball and football and was on the first Peterson High School football team.

After graduating from the University of Minnesota School of Agriculture, Don returned to work on the family farm.  He married Janice Thoreson in 1955 and together they purchased and worked the family farm while raising three daughters and one son.

As an adult, Don believed strongly in supporting local businesses and buying products locally.  He also participated on various boards and organizations for dairy, soybeans, soil and water conservation, ASCS, Farm Bureau and farm cooperatives.  He served on the Peterson School Board, the Good Shepherd Nursing Home board and was an avid local sports fan.

Don had a passion for community service and was honored to be elected to serve as a Fillmore County Commissioner for over 25 years.  During his many years of government service, he chaired the county commission several times, was on the boards of Zumbro Valley Mental Health, SEMCAC, county extension committee, Fillmore Day Activity Center, Houston-Fillmore Community Health Services, Dodge-Fillmore-Olmsted Community Corrections, state Community Health Services and advisor to the State Department of Human Services.

Don was a lifelong, active member of the church his great grandfather founded and pastored, Arendahl Lutheran Church in rural Peterson, MN.  In his lifetime, Don served Arendahl Church as a Sunday School Superintendent, a church board member, and most recently, leader of the cemetery board.

In 1994, Don married Ruth Chapel and the two of them spent many wonderful years together.  They loved traveling across the country to see their children and grandchildren, helping each other with their farming operations, playing cards with friends, listening to polka music, eating out at local restaurants, and visiting with friends.

Don will be remembered by family for many things some of which include: his signature bright orange hat he wore when attending the outdoor sporting events of his grandchildren; his patience in trying to teach three worried daughters how to train and show cattle at the county fair; his pickup truck deliveries of manure to fertilize his daughters’ gardens in Ohio and Tennessee; his insistence on his children getting a college education; his weekly short phone calls to check in with his long distance daughters; his unique sense of humor and funny one-liners.

Don believed in and modeled traditional values of faith, family, hard work, community service and setting high goals.  Because of the life he lived and the choices he made, he left a treasured legacy with his children, his grandchildren and his great-grandchildren.

A Celebration of Life will be held at 11:00 a.m. on Friday, September 9, 2022 at Arendahl Lutheran Church in rural Peterson, MN. A visitation will be from 9:30 a.m. until the time of the service at the church. Memorials may be directed to the Arendahl Church Cemetery fund. Hoff Funeral Home -Rushford is assisting Don's family with arrangements.