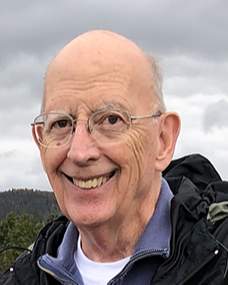 Dennis met and married Carol Bickerstaffe, the love of his life, in Salt Lake City, Utah. They were later sealed in the Manti Temple, Manti, Utah. Dennis and Carol have two children: John (Jessica) of Aurora, IL, and Robert of Winona. Three grandchildren: Kate, Noah (Elizabeth), and Audrey.

Immediately after high school, Dennis served four years as an electronics technician in the United States Coast Guard where he achieved the rank of Petty Officer First Class.

Dennis started at KUED Public Television at the University of Utah, Salt Lake City, as a camera operator in 1962 and became a producer-director in 1967. The Pack’s moved to South Dakota in 1969 where Dennis was first program manager for KESD and then director of programming for the ten stations of South Dakota Public Television.

He and his family moved to Winona in 1978 where he was a professor, founding member of the Mass Communications department, and Director of TV Services at Winona State University. During his 25 years at WSU he served on the Faculty Senate, Faculty Executive Committee, and as Department Chair.

Dennis loved the desert country of his home state of Utah and equally the bluffs and lakes of Minnesota. He enjoyed canoeing the backwaters of the Mississippi and traveling every fall to Duluth and the North Shore with Carol. After he retired he continued writing for journals and other publications on postal history and never stopped adding to his large and interesting collection. He loved photography and assembled several books for family members with photographs and notations.

Dennis was a member of The Church of Jesus Christ of Latter-Day Saints and throughout his adult life served in many callings and responsibilities.

He was always kind and courteous, and had a lovely sense of humor. More than anything in the world, he loved his family and expressed his love and gratitude to them every day.

He is survived by his loving wife, Carol, his sons John and Robert, and his grandchildren Kate, Noah (Elizabeth) and Audrey. He is preceded in death by his brother Eugene (Gene) Grant Pack II.