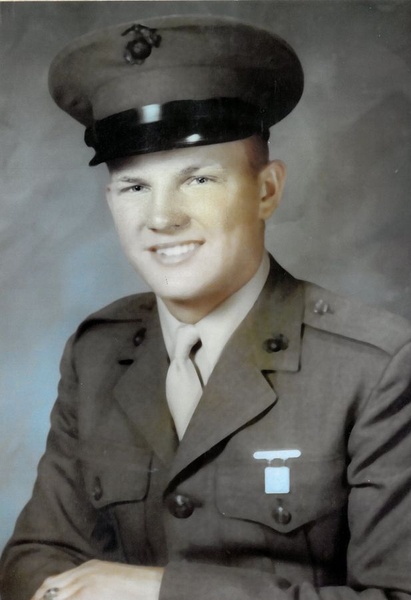 Dennis Ralph Kukowski, 74, of Lewiston, died Tuesday, January 11, 2022, at his home in rural Lewiston. Dennis was born August 7, 1947, in Arcadia, WI to August and Orphie (Kube) Kukowski. They farmed near Dodge, WI, until moving with his family to a farm south of Lewiston in 1954. Dennis graduated from Lewiston High School in 1965, then enlisted in the United States Marine Corps, serving two tours in Vietnam. In 1968, he was honorably discharged from the Corps and moved back to Lewiston. He and Deb Reps were married August 11, 1973. They made their home near Wyattville, where he farmed. Dennis later worked for Lewiston Feed and Produce. In 2020, he retired from Potter Construction.
Denny was a dedicated Marine. He was a social guy who loved to spend time with family and friends, playing cards and golfing. He was a proud dad and grandpa who cherished family traditions including the trout fishing opener, deer hunting opener, Memorial Day Weekend and countless times in "the Valley." Denny was a storyteller, with his stories becoming more exaggerated as they aged. His life revolved around family and being outdoors.
Denny was a faithful member of St. John's Evangelical Lutheran Church in Lewiston and American Legion Post 90.
Survivors include his wife Deb; three children: Trevor (Tiffany) of Savage, Tami (Torrey) Kistler of La Crescent, and Tory (Renata) of Norman, OK; five grandchildren: Logan, Elissa, Kullin, Joe and Natalie; siblings: Donald (Vicky) of Victoria, Dale (Linda) of New Auburn, WI, Randy (Cheryl) of Lewiston, Rick (Julie) of Bellingham, WA, Heide (Don) Ressie of Lewiston and Timothy (Kay) of Apple Valley; and many nieces and nephews. He was preceded in death by his parents and infant granddaughter, Seryna.
Funeral services will be 11 a.m. Saturday, at St. John's Ev. Lutheran Church in Lewiston with the Reverend Michael Lindemann officiating. Burial will follow in the church cemetery. A visitation will be at the church from 4-7 p.m. Friday and 10-11 a.m. Saturday. The Lewiston American Legion will conduct military graveside honors. Hoff Funeral Service of Lewiston is assisting the family with arrangements. www.hofffuneral.com. In lieu of flowers, memorials can be made to Lewiston American Legion Post 90 or Lewiston Volunteer Ambulance.