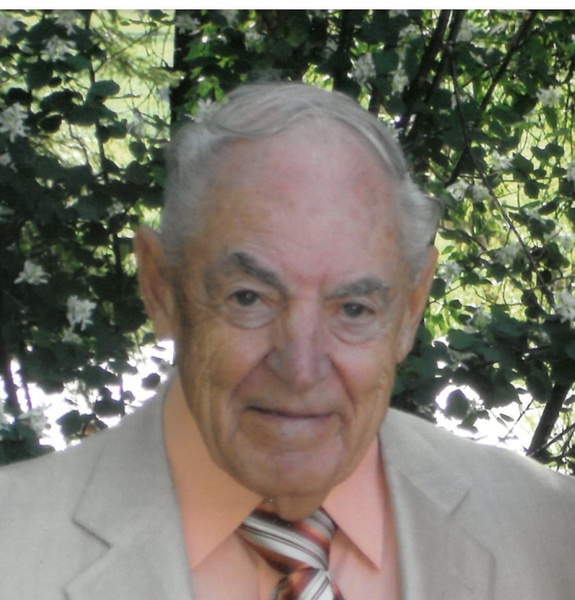 RUSHFORD - Darold James Sievers, 93, passed away peacefully on November 22, 2020, while residing at the Good Shepherd Nursing Home in Rushford, MN.
Darold was born on September 30, 1927 to Arnold and Etta (Heiden) Sievers at home in Hart, MN. He was the oldest of seven children. In his middle school years, one of his favorite pastimes was playing softball. After finishing his education at the one-room schoolhouse in Hart, Darold continued to help at home on the family farm doing chores and hauling milk, which served to jumpstart his career in trucking. He then moved to Mankato and joined Deztell Trucking as a truck driver. Later in his career, he and the family moved to Eyota to take a job with Dahlen Trucking from which he ultimately retired in 1991. He was a long-standing member of the local Teamsters Union. Everybody knew that Darold always had trucking in his blood.
Darold married Alice Marie Larson on April 29,1950 at Our Saviors Lutheran Church in Peterson, MN. How they met is a story in itself! Alice and her two sisters went to a movie theater in Lanesboro and asked Darold and his friends for a ride back home to Peterson when the movie ended. Alice sitting next to Darold in the car that day resulted in them becoming an inseparable married couple for the next 70 years.
After retirement, Darold and Alice built a home on his parents' original farm site in Hart where he could really exercise his passion for hard work by taking care of over 80 acres of land. Mowing the oversized yard with his tractor was his favorite activity. Darold and Alice travelled each winter for the next 20 years to their second home in Apache Junction, AZ to escape the cold Minnesota winters. While living in Arizona, Darold liked to socialize and play shuffleboard with his friends where he became a local champion more than a few times. Some of his favorite pastimes included travelling with friends and playing bingo while enjoying a few Brandy 7's.
Darold was easy going and made many good friends wherever he went. He could often be found having morning coffee with his buddies at Stumpy's in Rushford. He also loved to go to the annual Kellogg Watermelon Festival with his longtime friends.
Darold is survived by his wife, Alice Sievers of Rushford, MN; son, Richard (Diane) Sievers of Fort Myers, FL; daughter, Deanna Fix of Grand Junction, CO; sister, Lois Torgerson of Rushford, MN; brother, Wayne Sievers of Hart, MN; grandsons, Corey (Peggy) Sievers, Chad (Rachel) Sievers, Chase (Rebecca) Fix, Justin (JT) Fix; great-grandsons, Kevin, Ryan, John, and Charlie; and several nieces and nephews.
Darold was preceded in death by his parents, Arnold and Etta Sievers; sister, Ethel Feine; brother-in-law, Vernon Feine; brothers, Norman Sievers and Charles Sievers; sister, Betty Klawiter; brother-in-law, Wilton Klawiter; sister-in law, Diane Sievers; brother-in-law, John Torgerson; and son-in-law, Terry Fix.
The family would like to recognize the amazing staff at Good Shepherd Nursing Home in Rushford who provided their compassionate care and kindness to Darold when it was most needed.
Cards may be sent to Hoff Funeral Home C/O Darold Sievers Family, PO Box 625, Rushford, MN, 55971. Memories and online condolences may be left for the family at www.hofffuneral.com.

Darold will remain dearly loved and treasured forever by his family and many friends whose life he touched.
As Darold would say, "On the Road Again!"