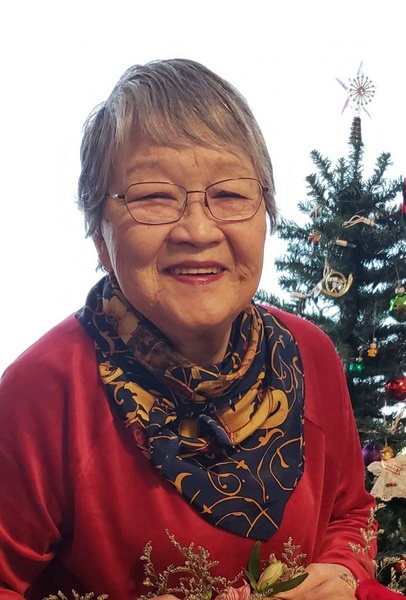 Chiyoko "Grace" (Yabe) Siebenaler, 87, formerly of Rollingstone, died peacefully on Saturday, December 28, 2019 at Suite Living Memory Care and Assisted Living in Roseville, MN. She was born on March 3, 1932 in Tokyo, Japan. Life was hard in the post-World War II era, but Chiyoko and her sister, Kazuko made the most of their childhood. Their father, Mutsunosuke, was a man of many trades including a sumo wrestling instructor. Chiyoko met William Peltier and had a daughter in Japan before he passed away. Later, she met Paul Siebenaler while he was stationed in Tokyo during the Korean War. The two were married on July 13, 1957. After their wedding, they moved back to the states and settled in Rollingstone. She came to this country with faith, adventure, commitment and love. She grew to love the farm and really missed it when it when it was time to move on. They started a family and had five children. Paul worked on the farm while Chiyoko raised the children and maintained the house before getting a job at Hubbard. She was a model employee everywhere she worked which included Holiday Inn and McDonalds in Winona, and Pudge's in Fountain City. Paul and Chiyoko later divorced. She was always taking care of someone. She enjoyed the Church Circle Ladies, running errands to Winona and taking long walks with her dog. Her biggest wish was for her family to be together. We were able to spend time with her at the end and know that she is now at peace catching up with everyone that went before her.
Chiyoko is survived by her children, Hiroko Saito, Rose (Kevin) Henderson, John (Julie) Siebenaler, Mary Moline, Terry (Sarah) Siebenaler, Robert (Cheryl) Siebenaler; grandchildren, Jeffery (Akira) Saito, Shawn (Erika Berg) Coleman, Matthew Henderson, Michael Henderson, Kassandra Siebenaler, John (Holly) Siebenaler, Ashli Johnston, Sarah (Evan) Copeland, Melissa (Oscar Salazar) Moline, Erik Moline, Elizabeth (Aaron DeCook) Siebenaler, Jacob (Laura) Siebenaler, Joshua Siebenaler, Zachary Siebenaler, Benjamin Siebenaler; six great-grandchildren; sister, Kazuko She is preceded in death by her parents, a granddaughter, and a brother-in-law.
As we say goodbye and celebrate the life of a very caring and loving mother, grandmother, great grandmother, aunt and friend, we invite you to her funeral service that will be held at 11 a.m. with visitation starting at 10 a.m., Friday January 3, 2019 at Hoff Funeral and Cremation Service, St. Charles. Father Tim Biren will be presiding. Memorial preferred to Winona Area Humane Society. Please view her tribute video and leave a memory at hofffuneral.com