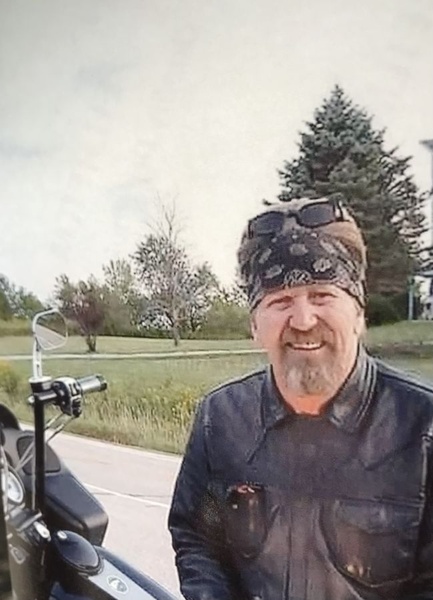 On the cold winter day of January 18th, 1971, after several hours of miserable labor, Bryan Keith Gravos entered this world in reverse (presenting breech) to bless Janele and Dennis Gravos with their first child. Not long after, Bryan began to pave the way for his siblings by being hell on wheels from his first steps.

Growing up on a farm near Highland, Bryan spent his youth playing pranks on his siblings: Ben, Brad and Bethany. As he grew older, he embraced a bit of a protector's heart; if you bullied his siblings, and it wasn't funny, there would be hell to pay. One would be very wise to avoid badgering any of his siblings for fear of Bryan's wrath, but he was especially protective of Bethany. During his teen years, Bryan assumed a nickname and became our beloved "Axle" and his arms of protection only continued to grow and encompass many throughout his life. Axle, however, always remained true to himself and did his best to mortify anyone he crossed paths with. He loved to make people gasp or blush with embarrassment, then laugh his ass off at the looks of astonishment on people's faces when they learned he was just playing. He would then 'take an' flash you a brilliant smile and wrap you in the best hug you ever experienced.

Axle found his one true love as a teenager: motorcycles. His first bike in high school was a Honda...how embarrassing! He later upgraded to a Harley Davidson, and he never looked back. Often motorcycles were his only mode of transportation. It was not uncommon to find Axle riding in the winter. The shock value of riding in snowstorms was something he loved to take advantage of. He could also be found riding around during Christmas in a Santa suit.

In the early 90's Axle attended a technical college in the cities for welding. He was a very talented welder and loved to create art. He especially enjoyed forging metal roses among other things. Axle also started training to be an underwater welder and was dive certified. He even served the Winona community for a time on their dive rescue squad during his thirties.
At one time, he also got his CDL and started driving big rigs. One boss called him Backwards Axle because he was so talent at going in reverse. (see birth story...)

After several years driving over the road, he spent a short time in Arizona working with an asphalt paving company, but the land of snow and ice called him back. He moved "home" and started hauling for local companies, the first of which was Rank Trucking of Winona. He also drove truck and operated the dredge for Mathy Construction, often diving to fix the dredge. The number of jobs that Axle could do for any employer made him invaluable.
Most recently he was an operating engineer with IUOE Local 49. If you were lucky enough to have Axle on social media you were blessed by him sharing amazing views of the sunrises, and sunsets from his seat in the crane, bobcat, or excavator. His favorite seat was in the crane though.

Bryan was a member of member of a local Motorcycle club for years. He enjoyed organizing memorial rides and fundraisers for those important to him. He was extremely kind and trusting and would loan his bike to nearly anyone. Often, he would allow one of his girls to take their first drive with him. He enjoyed teaching them. Axle could ride like he was one with his bike. His preference of handlebars was something called ape hangers, and he did look like an ape hanging from them! He could often be seen riding without hands, and never anywhere near the speed limit. That being said, one would never feel safer on a bike than with Axle in control.

Axle had many hobbies and was always up for a spur of the moment road trip. He enjoyed reading about history and war... (What?) He loved fireworks and making things explode! He was excellent at grilling and cooking. However, once while making pork chops in the crock pot he left the absorbent packing in...yum! Axle was always acting like a child and was a kid at heart. Axle was a friend and protector to nearly every person he met. He was exceptionally protective of the droves of female friends that you could find following him wherever he went. While he kept many safe, he was also a prankster and enjoyed getting a rise out of every person he could. Inappropriate jokes and comments were his specialty!

Those who knew Axle, knew him to be as kind and generous as a person could possibly be. In true Axle form, his final and perhaps most significant act of kindness will be to have saved the lives of 6 others by being a registered organ donor. One of the recipients will be blessed with his kick ass heart. Countless others will receive gifts of tissue donation, and a cornea.

A celebration of life will be planned for a later date in the summer so we can take him on one last ride.