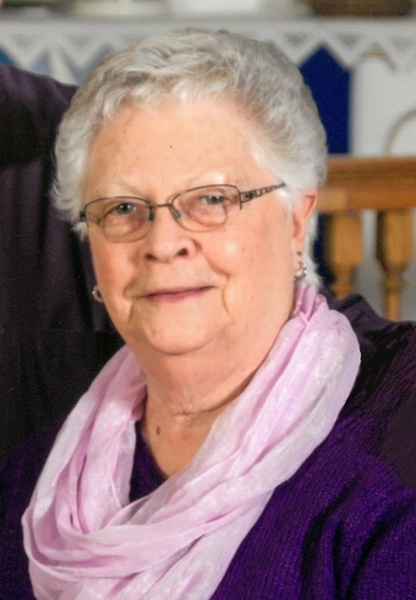 Rushford, MN - Beverly Ann Paulson Boyum, 86, of Rushford, died Monday, May 25, 2020 at Gundersen Health System. Beverly Ann Hatlevig was born August 14, 1933 at home near Peterson, MN to Marvin J. and Mabel T. (Halvorson) Hatlevig. Beverly grew up in Pine Creek near Peterson with her siblings Lu, Allen, Kathleen, and Ronnie. She attended the North Prairie Lutheran Church and it was there she was baptized, confirmed, and married. She attended school at the one room school house in Arendahl near Peterson. The Hatlevig kids were the last kids on the bus and often there was no place left to sit. A sixth grade boy, Orville Paulson would hold Beverly on his lap for the ride. Years later Orville and Bev would reconnect and get married. They were married January 26, 1952 and had 3 children, Nancy, Debra, and Charles. They lived in Peterson, Rushford, and Houston, MN where their children grew up. When Bev was young she stayed with the McCallum Family in Rushford and took care of their son and kept house for them. She then moved to Rochester and worked as an elevator operator at the Kahler Hotel in Rochester. After she and Orville were married she worked for many years at Rush Products in Rushford where she made many good friends.
After Orville passed in 1993, Bev moved back to Rushford where she only had to walk across the street to work at Rush Products. While living in Rushford, Bev asked out a good friend, Marlow Boyum, to dinner. Marlow and his wife, Darlean and Bev and Orville had been good friends for years. After dating for a while they tried to secretly get married, but Marlow had to tell his son Pete that he couldn't help on the farm that day, so all Marlow's kids and some grandkids showed up at the church for the wedding, which just made it more special. They were married at the Arendahl Lutheran Church on October 23, 1998. Bev gained a whole new family including 5 kids, many grandchildren, sisters and brothers-in-law.
Church was very important to Bev. She took part in many activities previously at Cross of Christ Lutheran Church in Houston and presently at the Arendahl Lutheran Church and helped with many church dinners. Until recently she played cards (500) once a week with friends. One of her favorite things was spending time with and playing Yahtzee with her grandchildren and great grandchildren. She was also a member of the Legion Auxiliary in Peterson, the Bev's Club, and the Red Hats Ladies. Bev was known by her family for her brownies and pumpkin bars.
Bev is survived by her husband, Marlow; children: Nancy (Tim) Williams of Crosby, MN, Deb (Brad) Erickson of Rushford, and Chuck (Kari) Paulson of Oakdale, MN; Grandchildren: Missy (Darrin) Deseth, Amanda (Kris) Jackson, Nicole (Glen) Knutson, Travis (Victoria) Williams, Toni (Steve) Oian, Teri (Blake) Carrier, Alexa (Taylor) Paulson, and Jonah Paulson, and 18 great grandchildren; step children: Kelly (Mike) Lawstuen of Lanesboro, Randy (Karolyn) Boyum of Utica, MN. David (Dawn) Boyum of Oakdale, WI, Peter (Julie) Boyum of Chatfield, MN, and Lynn (Lisa) Boyum of Plainview, MN; step grandchildren Matt (Amy) Lawstuen, Michelle (Kraig) Kapfhamer, and Mark Lawstuen, John (Megan) Boyum, Joe (Carrie) Boyum, Jess Boyum, Jeffrey Boyum, Eric Boyum, Luke (Josie) Boyum, Morgan (Ty) Knutson, Logan Boyum, Lauren Boyum, and Darrick Boyum and 12 step great grandchildren.
Bev is also survived her sisters: Kathleen (Milton) Hallum and Luella Brown; sisters and brothers-in-law Carol Hatlevig, Ethel Mae Noyes, Jeanette Brown, LaVerne (Denise) Paulson, LaVonne (Jim) Mindrum, Ruth Paulson, Bertha Boyum, Donald Boyum, Gail Boyum, Paul (Sheri) Boyum and many nieces and nephews and special friends.
Bev was preceded in death by her parents, first husband, Orville, son Baby Boy Paulson, brothers Allen and Ronnie and his wife Jackie, sisters and brothers-in-law, Bob Brown, Harold Paulson, Maurice Noyes, Art Brown, Joyce Boyum, and Arne Boyum.
There will be a private family service on Friday, May 29 with a public drive through visitation to follow from 3:30 - 6:00 p.m. at Arendahl Cemetery in rural Peterson. Please enter the cemetery at the south entrance and remain in your vehicle.
Hoff Funeral and Cremation Service in Rushford is assisting the family with arrangements. Please sign Bev's online guest book at www.hofffuneral.com.