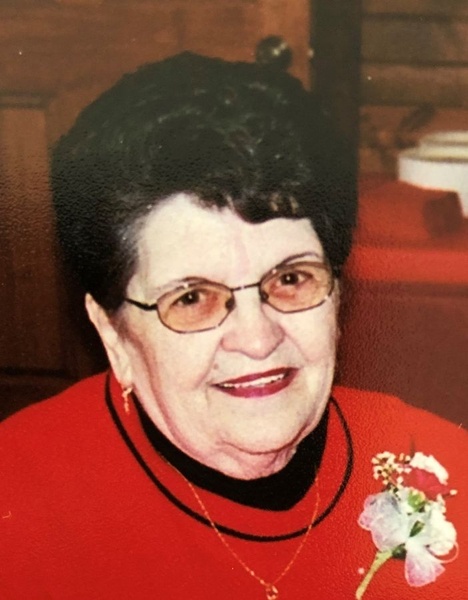 Beverly "Bev" J. Reps, 88 of Utica passed away Tuesday, September 29, 2020. at Whitewater Health Services after a long battle with dementia. Beverly was born October 5, 1931, at home in Winona County to Arthur & Hazel Ladewig. She graduated from Lewiston High School and cherished her classmates, especially enjoying their annual class reunions attending her last one (70th) in September 2019. After high school, she worked for Northwest Airlines in the Twin Cities, however wasn't suited to big-city living and returned home.

Beverly loved to dance and it was through dancing she met her husband Richard of 68 years while at the Wyattville Ballroom. They married on July 12, 1952, at The Little Brown Church in Nashua, Iowa, and started married life farming in the Fremont area before moving to Utica in 1963. At that time, she worked for the Agricultural Stabilization and Conservation (ASC) office in Lewiston but resigned after the birth of her third child. Beverly stayed at home briefly before working as a bartender around the area. She had the right temperament and the perfect sense of humor for the role; she was never without a joke to tell and could "BS" with the best of them! That being said, the late nights and missing sporting events for her children made her transition to Herff Jones in Lewiston where she worked in Customer Service until her retirement in 1998. She will be remembered her love of a good joke, M&Ms, dancing, travel, Country & Western music, and the Minnesota Vikings.

Beverly is survived by her husband Richard "Dick" Reps of St. Charles; one stepson, Bradley (Mary) Schroenghamer; two sons, Steven (Pam) of Lewiston and Scott of Red Wing; and one daughter Stacy (Brian) Schultz of Rushford; 7 grandchildren, 4 step granddaughters; 10 great grandchildren, 7 great step-grandchildren; and 2 great-great grandchildren; two brothers Earl (Joan) Ladewig and Roger (Diane) Ladewig both of Winona; two sisters-in-law Elizabeth Reps of Lewiston and Lillian Reps of Rushford; along with numerous nieces and nephews with one in particular holding a special place in her heart, Diane Rinn.

A private family gathering will be held at Hoff Celebration of Life Center with interment at Lewiston Public Cemetery and the mountains of Colorado.

The family would like to thank the staff and volunteers at Mayo Clinic Hospice and Whitewater Health Services for the care and understanding provided to their spirited mother.
Please share a memory of Bev at her online guestbook at www.hofffuneral.com.