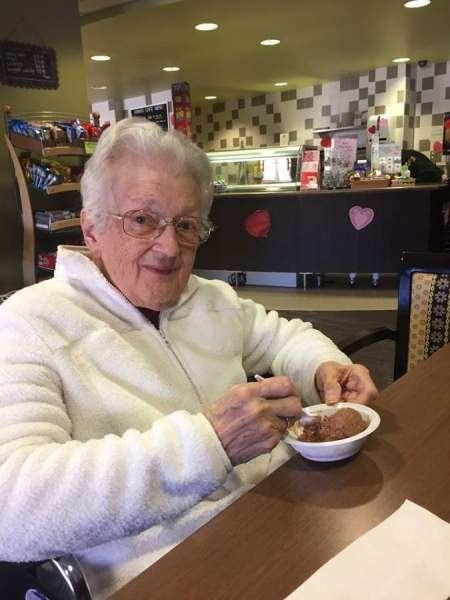 Betty Harms Miller, 94, of Winona, MN, formerly of Plainfield, IL, died Sunday April 26, 2020 at Sauer Health Care. Betty was born April 30, 1925 in Plainfield, IL to Henry and Agnes Hauptfuehrer Harms. She attended nurse's training at Silver Cross Hospital in Joliet, IL, and graduated in October of 1946. The day after graduation, October 27, 1946, she married Wesley Fred Miller. He died June 18, 1990.
Betty spent her professional career as a nurse in the Newborn Nursery at Silver Cross Hospital. She was passionate about infant care and community health. In the days before NICUs, she sometimes had tiny patients for weeks or months. She had a box full of treasured letters and pictures from the patient's families, chronicling their growth over the years. She was a member of Trinity United Methodist Church in Joliet, IL, and was a devoted worker in that congregation, both as a Trustee, and as a member of the Food Shelf crew.
Betty was preceded in death by her husband, Wesley; her son, Wesley J. Miller, M.D.; her parents, Henry and Agnes Harms; her brothers and their wives, Howard (Vera) and Grant (Genevieve) Harms.
Betty is survived by a daughter, The Rev. Betty K. "Betsy" Miller-Ruben (William A. Ruben); daughter-in-law, Nancy L. Nelson; five grandchildren, Jonathan (Naomi Scott) Miller, Matthew Miller, Nickolas (Matilyn Obregon) Miller, Zachary (Arielle) Ruben, Miranda Ruben; one great-grandchild, Justine Miller; and eight nieces and nephews.
If you are moved to give a memorial, please consider: The Dr. Wesley Miller Scholarship Fund of the University of Minnesota Foundation, Sauer Health Care, Winona, MN or the Ridgewood United Community Pantry at Trinity UMC, Joliet, IL. Cards may be mailed to Hoff Funeral Home, C/O Betty Miller Family, 3480 Service Drive, Goodview, MN 55987.
Burial will be in the Bohri's Valley Cemetery in rural Fountain City.
Please leave a memory of Betty and sign her online guestbook at www.hofffuneral.com. Hoff Celebration of Life Center, Goodview, is entrusted with arrangements.