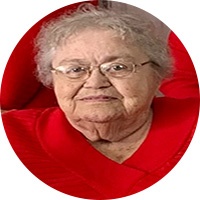 To view the livestream of Betty's service, please follow this link: https://view.oneroomstreaming.com/authorise.php?k=1639772916154546