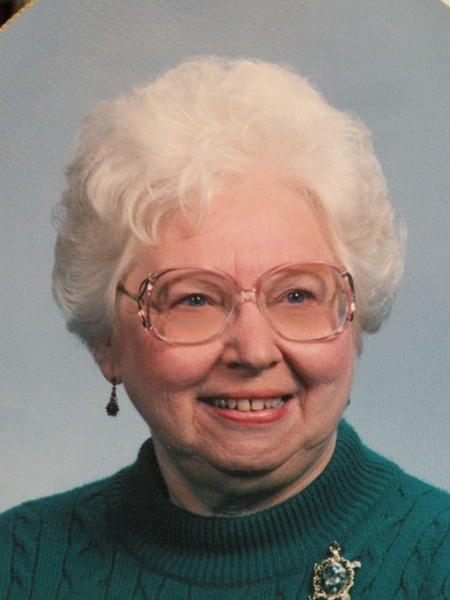 Audrey Peterson, age 92 of Rushford, passed away on July 12th, 2020 at the Good Shepherd Nursing Home.

Audrey was born on October 6th, 1927, in Rushford, Minnesota, the daughter of Albert and Sylvia (Hauge) Nordgaard. She grew up in Rushford and graduated from Rushford High School in 1945. Audrey was united in marriage to Revere H. Peterson on November 2, 1947, and after moving from city to city during the early days of their marriage, they purchased Audrey's childhood home in Rushford and settled down to raise their family. They moved to Winona in their retirement years, and in 2007, Audrey returned to Rushford.

Over the years Audrey worked at Miller Implement and Rushford Chevrolet, and retired from the First National Bank of Rushford in 1989 after more than 22 years of service. She was a member of the VFW Auxiliary and Rushford Lutheran Church, where she served as its treasurer for many years.

Audrey cherished time with her family, especially at Christmastime. Her hobbies included frequent drives in the countryside, reading romance novels, listening to jazz music, eating out, watching westerns on television, doing crossword and word find puzzles, and playing computer solitaire. She loved songbirds, daisies, banana splits, bling on everything, pretty clothes, purple streaks in her hair and her Facebook friends from around the world. And of course, she insisted her nursing home caregivers match her socks to her dress each day!

Audrey is survived by her children, Lon (Elaine) Peterson of Willmar, MN and Valencia (Phil) Gaddis of Rushford; her double nephews, Miles (Carmen) Peterson of Minneapolis, MN and Gary (Kristi) Peterson of Bremerton, WA; 3 grandchildren, 5 great grandchildren, 3 great step-grandchildren, 2 great-great-grandchildren, and several nieces and nephews. She is preceded in death by two sisters, Ruth (Mike) Rohweder and Grace (Farrell) Peterson; Revere Peterson, her husband of 44 years; Keith McCallum, her special friend and companion during her widowed years; and a great granddaughter, Kaitlynn Gaddis.

A private family service, with Rev. Steve Chellew officiating, is being planned. Hoff Funeral and Cremation Service - Rushford is assisting the family with arrangements. Please leave a memory of Audrey and sign her online guest book at www.hofffuneral.com